How to plat wedding shoe game 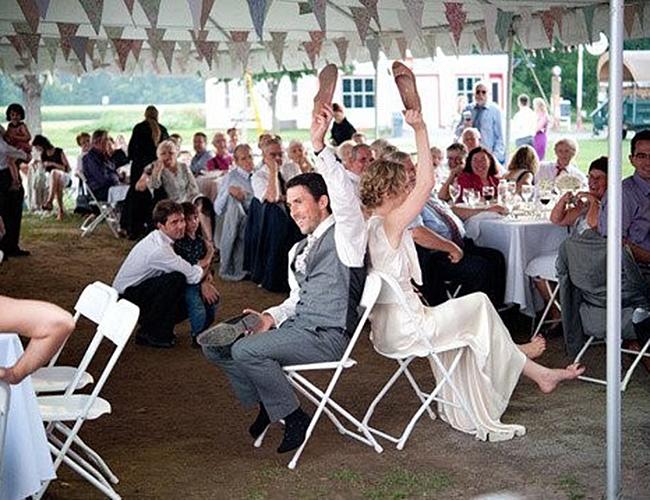 Have you heard of the wedding shoe game? If you haven’t yet—it’s a fun reception game that tests how well the bride and groom know each other through a variety of questions without seeing each other’s answers.

It’s a great first game to play after the meals and the toasts or as a program insert for some downtime. Check with your event coordinator or DJ to see when it’s best to play the game.

In this wedding game the bride and groom are made to sit back-to-back in front of all their guests. In the process, the groom will be holding one of his shoes and one of his bride’s shoes, as does the bride. The coordinator or the anchor or the one who is organizing will act as host. Then, the couple is asked a series of questions about their relationship, for which the answer is either “the bride” or “the groom.” The bride and groom cannot speak, they can only answer by holding up the shoe of the correct person. For instance, if the question was “Who asked for the date first” and the answer is the bride, they should both hold up the bride’s shoes.

What Is The Wedding Shoe Game?

The Wedding Shoe Game is a fun wedding reception activity where the bride and groom have to prove their knowledge of each other.
They will be asked questions such as who the best cook is or who is the worst driver, and they must decide who it is based on-all without seeing each other’s answers. It is a fun game for the guests to watch, particularly when the answers don’t align!

This game is such a simple set up and requires the bare minimum of preparation.

It is an easy wedding reception game to play but still provides a great source of entertainment. Here is how you play:

Set up two chairs back to back, and seat the bride and groom down together.

The point of the game is that they don’t see each other’s answers.

For this game, the bride will be using her own shoes, and her partner’s shoes.

Have them take off both of their shoes and hand one to the other. They should each be holding one of the bride’s shoes and one of the groom’s.

These shoes will represent each other.

The host will be reading the questions out loud to the couple.

It is usually the maid of honor or best man, although it can also be one of the parents of the couple or the DJ.

They need to be confident enough to stand up in front of a crowd, so choose someone who does not get stage fright easily.

Have the person in charge of the questions hold a microphone, so that the entire room can hear them speak.

Either print out a list of questions that you found online or make up your own!

It is a good idea to make a mix of questions–have them be serious, romantic, difficult, and hilarious.

Take some time to think of entertaining questions that make the couple really think hard about their answers.

Also, make sure that the couple don’t know the questions beforehand.

They should not have any extra time to think of their answers or even discuss it with each other.

The point of the game is to test their knowledge…and get a few laughs.

The questions should be prepared ahead of time by someone in the bridal party, typically the one who will host the game.

Once the question is read out, the bride and groom should immediately answer.

They will raise the shoe of the person they think fits the description best.

End the questions with one of the following:

If you want even more wedding shoe game questions, we have a great list of Who’s Most Likely To Questions for Couples, that would work perfectly!

Where Can The Shoe Game Be Played?

You don’t have to reserve this game for the wedding reception! Try this fun couples question game at a bridal shower, engagement party, or rehearsal dinner.
Wherever you have friends gathered around to celebrate, you can definitely play this He Said, She Said Game.

Shoe Game At A Wedding Reception?

Always make sure ahead of time that the couple is willing to play this game. You don’t want to upset them by pestering them with private questions.
But if they are up for it, it can be a great way to get the reception started and have everyone laughing.
Use our guide to help you plan your own version of the Wedding Shoe Game!

How many questions should you have for the wedding shoe game?

We suggest that you limit your shoes games to 25-35 questions. The game should not last so long that guests will get bored, but you should not let it be too fast, and some visitors will wonder why you did it.

How long should the she game be at a wedding?

A wedding shoe game at a reception is a good time to shoot for between 10-15 minutes.

When should you play the shoe game at a wedding?

You’ll want to play this game while everyone is seated for dinner, or in between activities you’re switching between. For example, after the cake cutting, before opening up the dance floor, etc.

Do you have to use your own shoes?

Of course not! You can use different colored paddles, photos of each other, a colored scarf, etc. You can play this game any way you like. You should be sure to have two different “markers” that represent the bride vs. the groom.

We hope you’ve enjoyed reading about the 100 wedding shoe game questions and tips.